In January, a Philadelphia police officer was shot 3 times by Edward Archer, a 30-year old man with a criminal record. Despite his injuries, police officer Jesse Harnett managed to return fire, injuring the assailant. After the attack, Edward Archer was arrested and made statements that indicated he was an Islamic terrorist. However, many experts are debating whether this attack was truly an act of Islamic terrorism or simply the depraved act of a mentally unstable individual.

Officials investigating the incident in Philadelphia have not found any evidence indicating that Archer was communicating with the Islamic State or other radical groups. FBI Director James Comey believes the information available suggests that Archer was acting alone. As such, some experts feel that Edward Archer’s assault stemmed from deep psychological issues, and his claim of IS allegiance was a rationale conjured up to give his attack a greater sense of purpose. Indeed, Archer’s mother claims that her son suffered multiple head injuries and began hearing voices in his head in the days leading up to the attack. 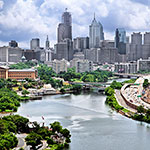 However, others contend that Edward Archer was a fully radicalized Islamic terrorist. As evidence, they point to trips he made to the Middle East over the past 5 years. Additionally, Archer himself proclaimed “I follow Allah and I pledge allegiance to the Islamic State. That is the reason why I did what I did.” Archer also told investigators that he targeted a cop because police enforce laws that contradict the teachings of the Quran. Even so, FBI officials began investigating Archer’s possible ties to IS and were unable to find evidence indicating Edward Archer was involved with the terrorist group.

Edward Archer’s attack highlights a growing concern within the security community. Events like the incident in Philadelphia blur the distinction between terrorist attacks and other acts of violence. Some lone wolf attackers are true adherents that maintain contact with groups acting in Islamic terrorism, and use violence to advance ideological goals. Others, however, may simply claim allegiance to a terrorist group in order to garner attention or justify acts they already felt inclined to commit.

Several experts believe that many lone wolf attackers are what law enforcement dubs injustice collectors. Injustice collectors are people who constantly catalog petty offenses they suffer and eventually develop a worldview where they believe they are bullied, victimized, and disrespected. The security experts at IMG GlobalSecur believe individuals with this psychological profile may be at greater risk of radicalization by Islamic terrorist organizations. To counter this threat, GlobalSecur’s security consultants feel that government officials should formulate positive strategies to identify and defuse injustice collectors at risk of radicalization.