Yemen is a small, impoverished country at the southwest end of the Arabian Peninsula. As most international security consultants know, however, the country occupies a strategic location on the Bab al-Mandeb strait. Unfortunately, Yemen has suffered from chronic political instability in recent years, and the already unstable situation has resulted in a Yemen Civil War. In early 2015, Houthai rebels took control of the country’s capital and drove the President into exile. There are at least three groups are vying for control of Yemen: 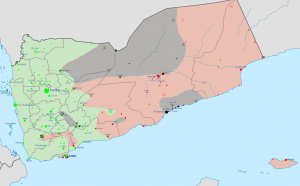 President Hadi’s faction is supported by the predominantly Sunni south, local tribesman, and several Arab states. Other Yemenis support the Houthi rebels and army units loyal to former President Saleh. However, the conflict is further complicated by the presence of Al Qaeda terrorists. AQAP has a force of several thousand in Yemen and opposes the two other factions. This terrorist group has claimed responsibility for several suicide attacks and is taking advantage of the Yemen Civil War to increase its influence in the area.

Most international security consultants see this conflict as a proxy fight between Sunni and Shia Muslims. For instance, the Gulf States have accused Iran of backing the Shia Houthis rebels. Although Iran denies this claim, the country has a long history of backing Shia allies throughout the Middle East. Additionally, the AQAP faction seems to be taking advantage of the sectarian hostilities, extending their influence in the country.

One concern is that the Yemen Civil War will exacerbate sectarian violence in the Middle East. Sunni-Shia tensions have already stoked a horrific war in Syria and Iraq and Yemen may be just another front in a wider war. Some observers even fear this expansion of hostilities could eventually spark a conflict between Iran and the Gulf Arab states. If a hot war over the Persian Gulf were to occur, there would almost assuredly be disastrous consequences.

While observers fear an expansion of Sunni-Shia hostilities, many Western governments feel that the Yemen Civil War has provided Al Qaeda with a safe haven and staging ground. Although terrorists have been operating in the country for years, the recent hostilities have provided AQAP terrorists with an opportunity to consolidate their position and expand their reach. Additionally, the collapse of government in many parts of the country has complicated Western efforts to track terrorists inside Yemen.

With three separate warring factions, the Yemen Civil War has thrust a small, poverty-stricken country into the international limelight. Yemen is in the midst of a brutal sectarian conflict and each side has powerful allies in the fight. As the situation unfolds, the IMG international security consulting firm will be watching intently to see if the conflict generates larger regional or global security impacts.

IMG is a top international security consulting firm with experience in executive travel security and international threat assessment. To learn more about the solutions offered by IMG, please visit: http://www.theimg.com/international-security-consulting-firm