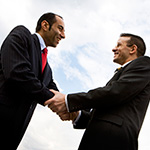 Jeff Zisner, president and CEO at Aegis Security & Investigations in Los Angeles, says his phone was “ringing off the hook” with new inquiries on Wednesday in the aftermath of a shooting that left 14 people dead and more than a dozen injured fewer than 100 miles away in San Bernardino. Several mass shootings in America over the past year have occurred in workplace settings, prompting companies to take a second look at security systems to prevent employees from coming in harm’s way.

“Honestly, I think it behooves anybody to take some sort of an action at this point, whether that is re-educating your people on your safety programs or implementing them for the first time,” Edward Yost of the Society for Human Resource Management says. “To simply do nothing and believe you’re a low-risk environment, that’s not a legitimate way to look at it at this point. In this world we’re living in, nobody is a zero-risk environment.”

A string of high-profile attacks with multiple casualties have brought workplace safety to the forefront. In August, Vester Lee Flanagan II shot and killed two former co-workers and news anchors during a live morning broadcast in Roanoke, Virginia. Last Friday, a gunman fired on a Planned Parenthood clinic in Colorado Springs, Colorado.

Christopher Hagon, managing partner at Florida-based Incident Management Group (IMG), says companies and venues have contacted his international security firm in droves since the Paris attacks on Nov. 13 in which 130 people were killed. “I think the most contacts we’ve got are literally the last couple of weeks,” Hagon says. “We’ve been snowed under with calls.”

In the San Bernardino shooting, two suspects fled the scene and were later killed by police after opening fire on a holiday party for employees of the county health department where one of the suspects worked. Investigators haven’t identified a motive.

Following news of an attack on a work group, companies are left wondering whether they should ramp up security, and if so by how much? Should office buildings install metal detectors? Should doctors’ offices have silent alarms at the reception desk? Do retailers need an in-store security guard?

“Every business is different so security is going to be fundamentally designed around what the culture of your organization is suited for in the context of what are the risks, threats and vulnerabilities?” says Arnette Heintze, a former Secret Service agent and co-founder and CEO of Chicago security company Hillard Heintze.

In general, experts already know that certain industries are more vulnerable to workplace violence than others. Occupations that require workers to be alone in unfamiliar environments, carry cash or interact with the public are particularly susceptible — including taxi drivers, librarians, home healthcare aides and water meter readers.

Nearly 2 million Americans are victims of workplace violence each year, which encapsulates physical attacks as well as threats, harassment and intimidation. In the two decades between 1992 and 2012, a reported 14,770 people died as a result of on-the-job violence.

Some of the most obvious protections that companies might consider following an attack such as the one in San Bernardino are physical — security guards, surveillance systems, metal detectors and fences that line a facility’s perimeter. But security experts consistently say two of the most important first steps that companies can take are procedural ones — creating a workplace safety policy and completing a risk assessment.

Creating a safety policy is important because it serves as grounds for terminating employees who violate it. Companies are bound by the Occupational Safety and Health Act of 1970 to provide a workplace that is “free of known dangers.” Though OSHA does not have specific regulations on workplace violence or safety precautions, it offers prevention programs and training materials.

Since there’s no formula for a safe workplace, a risk assessment identifies physical vulnerabilities such as easy building access or poor lighting and also illuminates past threats or potentially volatile situations that have simmered beneath the surface. Companies can do this in-house, or hire an outside firm — Zisner charges between $800 and $20,000 for risk assessments in the Los Angeles area, depending on the company’s size.

“One of the easy things you can look at is multiple points of access,” Yost says. “If your building or offices have multiple places where employees come and go, that certainly could be a risk.”

Heintze says former or disgruntled employees represent a far greater threat to most companies than random shooters, and training can help employees recognize signs and identify threats. The key to identifying which employees might become violent, says Dr. Harley Stock, a forensic psychologist and managing partner for IMG, is determining which not only have an ax to grind, but are likely to retaliate. Zisner adds that if an employee is fired, the likelihood that they will attack in the first 72 hours is far greater than at a later point.

Stock also says there’s one motivating factor that has consistently proved particularly strong in his investigations: “Across all people around the world, it’s the sense of perceived injustice,” he says. “When people move from intention to volition — I’ve had enough, I can’t stand it anymore and I’m going to get even — those people are extraordinarily and immediately dangerous.”

To contend with these risks, experts say employees must have a clear way to report both overt and potential safety concerns and feel confident that supervisors will investigate them.

“If you look back with these incidents, it’s nearly always the case that something could have been picked up in either a lack of communication or lack of follow-up or lack of procedures and policies in place,” Hagon at IMG says.

Once a company has a safety policy, risk assessment and reporting protocol in place, experts say it’s important to keep these documents updated and remind employees of their contents through training or seminars. This framework can also inform a company’s decisions to hire a security guard, invest in a surveillance system or upgrade building entry procedures. For example, if a company suddenly cuts a fourth of its workforce, Yost recommends hiring a temporary security guard.

At the end of the day, Stock reminds worried employees or executives that the chance of a shooting in any workplace is slim. “This kind of an event is extraordinarily unusual,” he says.

The original article about workplace violence security can be found at: http://www.ibtimes.com/2015-mass-shootings-security-experts-advise-companies-re-evaluate-safety-following-2210892

IMG Note: To contact Chris Hagon or to learn more about IMG’s workplace violence security services, please visit http://www.theimg.com/workplace-security. Security services include threat or risk assessments, security evaluation and planning, and on-the-ground security services. IMG can tailor a security audit to the specific needs of a particular company, and help to create a security improvement plan. Each company or business is, of course, unique and the purpose of the consulting is to create a unique security framework that matches those needs. Workplace violence security is not, after all, a one-size-fits-all endeavor.