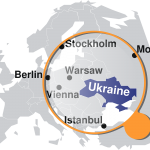 The deposition of Ukrainian Prime Minister Viktor Yanukovych in February proved a critical turning point in Russia’s relations with Ukraine. No longer would Russia rely on the influence of pro-Russian factions within Ukraine; instead, Moscow would start to exercise its military power. This new view led directly to the annexation of Crimea in March 2014. However, some analysts believe that Russian aggression could go even further, fearing that Russian forces massed along Ukraine’s eastern border could be preparing for an invasion.

This renewed Russian aggression has caused a stir in many former Warsaw Pact countries such as Poland, Moldova, Bulgaria, Romania, the Czech Republic, Slovakia, and the Baltic States. Citizens in these nations fear that if Russia is left unchecked, Moscow will continue to try to re-impose Russian influence on its former dominions. As such, these countries are looking for reassurance from the West, particularly the United States.

Yet, the people of Eastern Europe are not the only ones concerned about recent Russian aggression. Many multinational companies have operations in the region and are concerned about the integrity of their corporate operations and state of employee travel security in Eastern Europe. To aid this effort, IMG (http://www.theimg.com/), a leader in executive protection and travel security, has released guidance on the subject.

Employee travel security in Eastern Europe is normally not a large safety concern. Ukraine and Moldova are at an elevated risk, but most of the countries in the region are roughly comparable to other EU nations in terms of security. For example, the countries of Poland, Czech Republic, Romania, Bulgaria, Slovakia and the Baltic States are generally pretty safe. Visitors should be concerned about the potential for scams and petty theft, but violent crime directed against visitors is generally uncommon.

However, an escalation of Russian aggression could have negative implications for employee travel security in Eastern Europe. For example, increased tensions could lead to more Cyber attacks on Western organizations based in the region. These attacks could be carried out by the Russian government or by rogue pro-Russian elements. One such organization, dubbed “Cyber Berkut,” has already claimed credit for an attack against NATO’s website, and may seek out other pro-Western targets.

Additionally, an escalation of tensions could lead to a Russian energy embargo. After all, much of Europe is dependent on Russian oil and gas. An embargo could lead to shortages and civil disorder in the region, especially if such an embargo took place in winter when demand for natural gas is at its highest. Furthermore, an energy crisis could affect the operations of companies doing business in the region, especially those that rely on fuel to conduct their day to day operations.

Given these threats to employee travel security in Eastern Europe, what is an organization to do? Luckily, there are many options for firms. Firstly, professional security consultants can provide advice tailored to an organization’s unique needs. This can help firms develop policies and plans should the security situation deteriorate. Moreover, companies can continue to monitor the situation through the media and daily intelligence briefings. Professional security consultants normally have access to such briefings and can recommend a reputable service. Finally, organizations need to develop an evacuation plan in the event there is an emergency or a catastrophic deterioration of the security environment. Although such a scenario is unlikely, it is a possibility, and organizations need to be prepared.

IMG has extensive experience in employee travel security and executive protection. To learn more about the full range of services offered by IMG, please visit: http://theimg.com/travel-executivesecurity.html

The IMG Group is a leading firm in the employee travel security industry. Corporate or business organizations concerned about their need for detailed and robust travel security planning can reach out to the IMG Group for assistance. The company’s expert security consultants provide services such as executive, employee, VIP, expatriate travel security, executive protection, risk and threat assessments, workplace violence prevention, crisis management planning, and more.