The city of Mosul is located approximately 250 miles north of Baghdad and is home to more than one million people. Even though Raqqah, Syria is the official ISIS capital, Mosul has been the de-facto headquarters for the group since June 2014. As the largest ISIS stronghold in Iraq, Mosul is the focal point of a large coalition operation that will attempt to liberate the city. The Mosul battle will prove to be of crucial importance for the Iraqi government, their allies, and the Middle East as a whole. 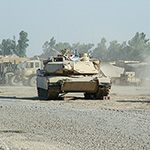 Mosul is both a historic city and one of Iraq’s most cosmopolitan. It is a religiously and ethnically diverse place consisting of Arabs, Kurds, and Turkmen. After ISIS overran and swept through Ramadi and Fallujah in early 2014, the group continued to spread across Western Iraq. However, the capture of Mosul became ISIS’s most significant victory, allowing it to proclaim itself a Caliphate. During the capture of the city, many Iraqi soldiers fled or surrendered, permitting a relatively small number of ISIS fighters to take Mosul. The images of Iraqi soldiers dropping their weapons and fleeing greatly weakened the credibility of the Iraqi government and has been the source of embarrassment for the nation. Consequently, the government of Iraq has made the Mosul battle a top priority.

The campaign to liberate Mosul will be led by Iraq, but will rely on significant support from a motley coalition of forces. The operation will be organizationally complex and include Sunni Arabs, Shiites, Kurds, Turkmen, NATO allies, and others. Moreover, the proximity of regional powers, such as Turkey and Iran, will make the operation even more complicated. Although they are nominal allies in the fight against ISIS, all these groups have differing agendas that could present difficulties for the campaign and its aftermath.

Despite the complexity of the situation, the Mosul battle is vitally important. Firstly, many months of preparation have been undertaken to fully train and equip Iraqi forces for the battle, and a victory in Mosul would go a long way in restoring confidence in the Iraqi military and government. Secondly, the recapture of the city would be a crippling blow to ISIS and could prove to be its death-knell. Finally, the operation to liberate Mosul is important for American credibility in the region. The US has come under scrutiny for its handling of ISIS, and a victory in Mosul, if executed with proper follow-through, could prove a triumph of both diplomacy and arms. In short, no matter how the Mosul battle ends, its consequences will be felt around the world for some time to come.